One more doll sold in 1984 was the Great Shape Skipper #7417. She had blonde hair with bangs and a ponytail.

She was sold wearing a pink leotard with a turquoise sash, pink and blue striped tights and came with pink tennis shoes. A pink or turquoise sports bag was enclosed. The doll was available internationally and was called Ritmic Skipper in Spain, Enorm in Form Skipper in Germany and En bonne forme Skipper in France. 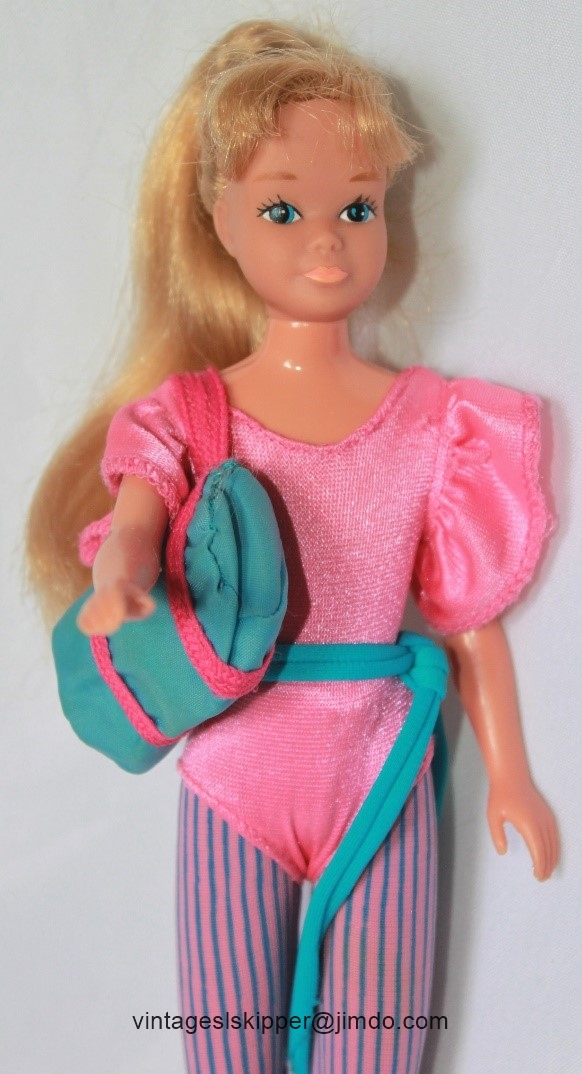 The same year a special issue of the Great Shape Skipper was available in England and Northern Ireland only.

This doll was dressed in a green bodysuit and green and yellow striped knee high gaiters, yellow ballet slippers and a yellow sash and brought along a green or yellow sports bag. 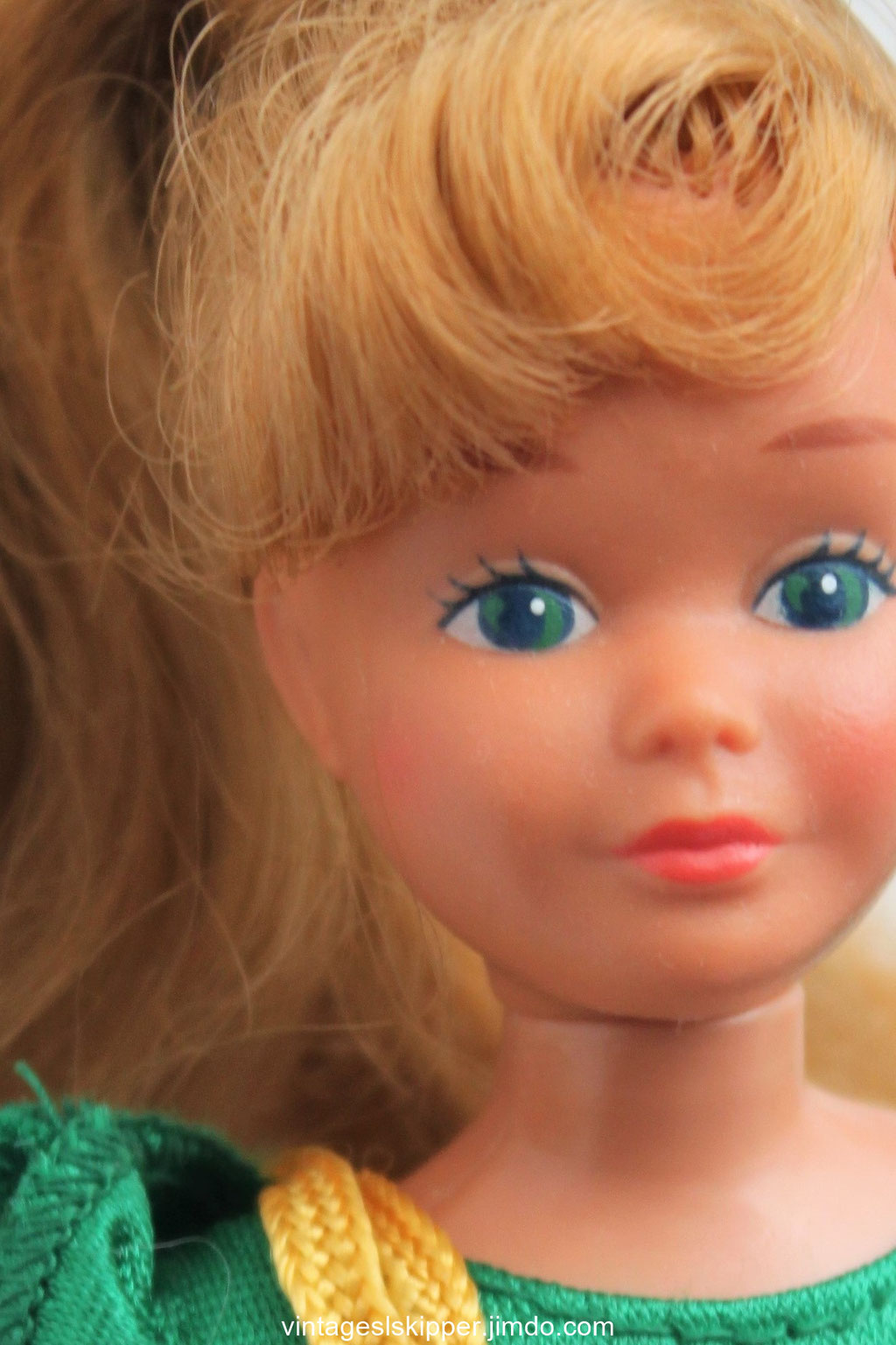 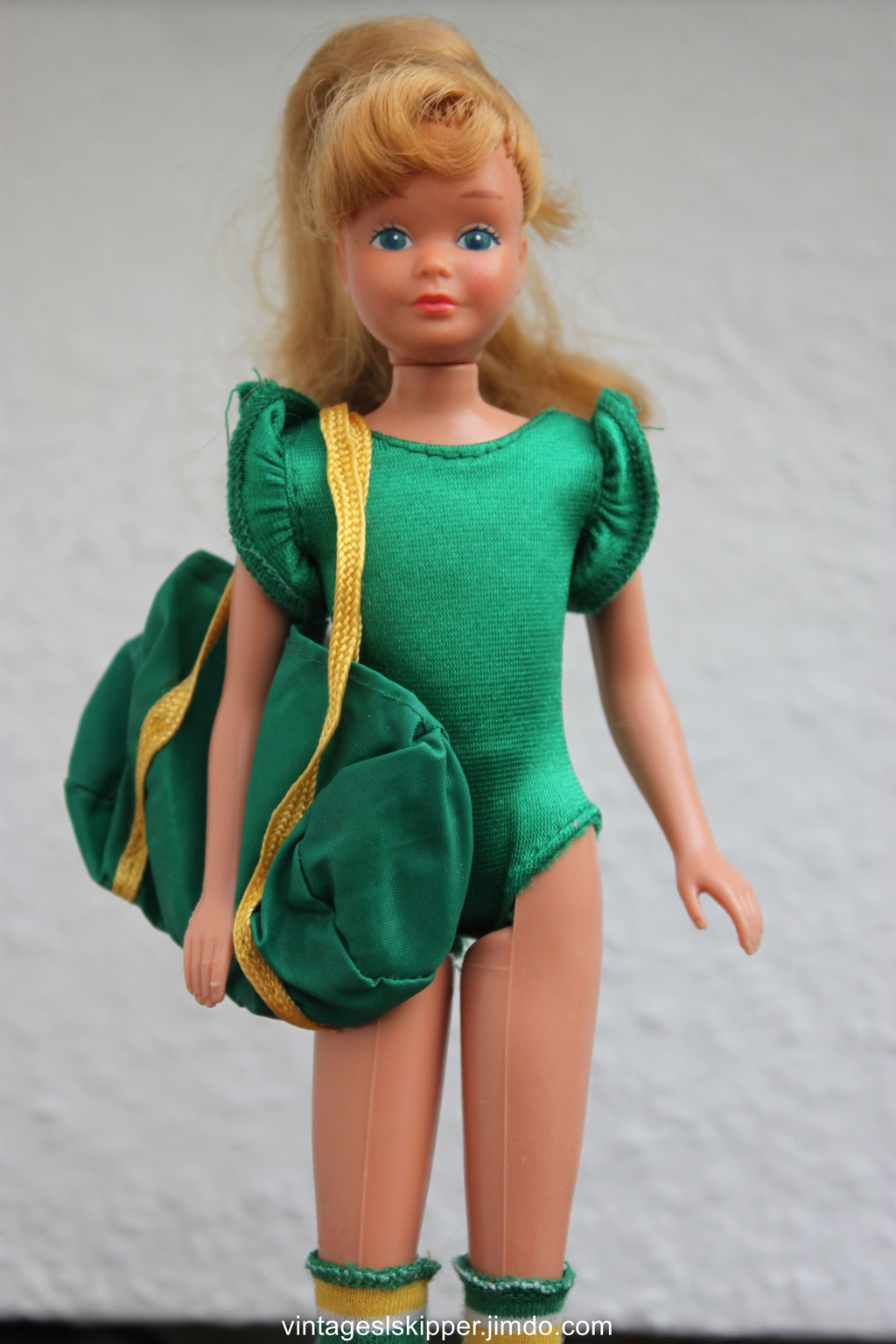 In 1985 the Sea Lovin’ Skipper #9111 was released in Europe. She was also called Regate Skipper, Maritim Skipper or Mare Skipper.

This doll looked very much like the Great Shape Skipper dolls, but she was dressed in a short beach overall with red, white and blue stripes and came with white tennis shoes and a white beach bag.

One more European and Canadian exclusive doll was the 1985 Beach Time Skipper #9104 – Plage Skipper in France, Strandspass Skipper in Germany.

She was a very pretty Malibu doll with lots of pale blonde, long hair, which is held together by two braids. The Beach Time Skipper was dressed in a red one piece bathing suit with attached skirt.

This European exclusive doll is rare.

The doll was made in Hong Kong. 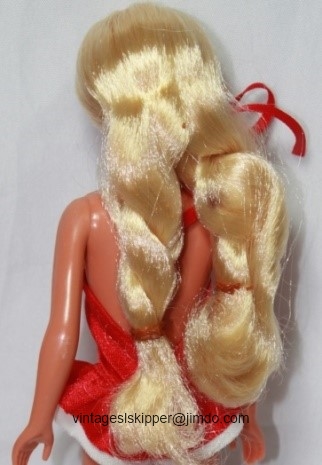 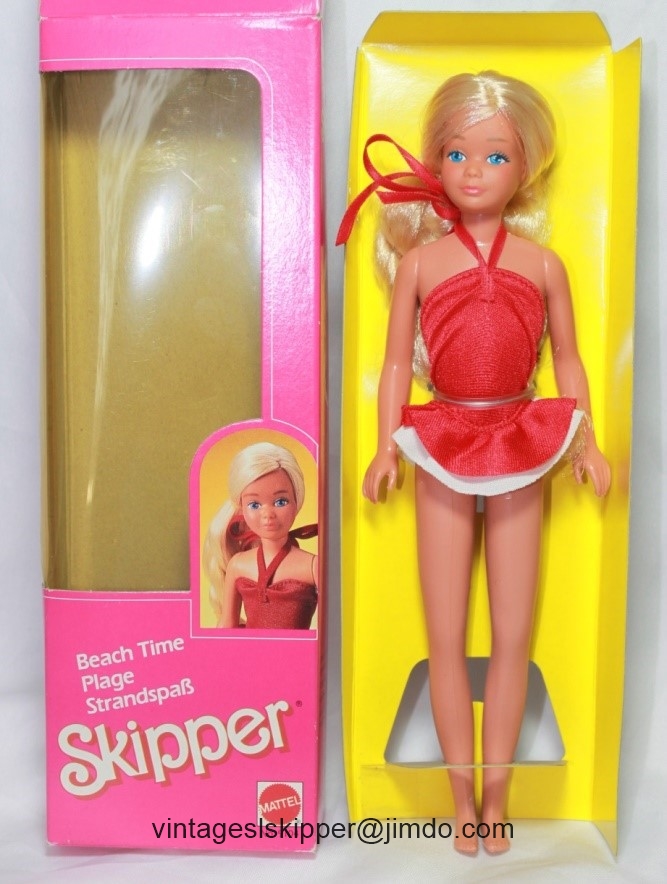 In 1985 a Skipper with another new head mold was introduced: Hot Stuff Skipper #7929.

The doll had blonde curly hair, no bangs and a ponytail. She was dressed in a hot pink bodysuit, short red skirt and white tights and came with an aqua sweater, yellow stretch pants, a blue headband and yellow tennis shoes.

Hot Stuff Skipper was made in the Philippines and had the marking: © Mattel, Inc. 1967

The Hot Stuff Skipper head mold was used for the Tropical Skipper #1021 in 1986.

This doll wore a black swimsuit with multi colored flowers and a head ribbon with a huge yellow flower. Her long hair was braided. There are dolls with heavier or lighter make-up. The Tropical Skipper had the same markings like the Hot Stuff Skipper, but was made in China. She can be confused with the 1988 Island Fun Skipper (also called Tropical Skipper in Europe).

The 1986 School Going Skipper #1284 was a blonde doll with bangs and two pigtails. She was a dressed doll available in five different outfits and in two new head molds that were only used for that doll. One of these head molds resembles the "Hot Stuff Skipper" headmold (not pictured).

The fashions were unique to these dolls – except for one doll, which was dressed in #2237 ‘So Active Fashions’ from 1986 (a pink and white dress).

Mattel had an Indian affiliate, Leo Mattel, who produced Barbie dolls for the Indian market, where Barbie wasn’t well known. The company was based in Nagpur. Production started around 1986. The marketing was done by another Indian company: Blowplast, Inc., to reach the Indian consumers. School Going Skipper dolls were only available in India.

Yet another Skipper with the vintage face mold sold in Europe in 1986 was the Music Lovin’ Skipper #7076.

Mattel used the vintage head mold for this doll. She had long, blonde hair without bangs, tied together in a ponytail.

The doll came dressed in a yellow jumpsuit, a yellow knit sweater (cardigan), yellow knit socks and white tennis shoes. She had a gray walkman with a tape. The Music Lovin Skipper was another doll released in Europe only.

She had the vintage head mold, but her head was much larger than the heads of the dolls before.

Tennis Skipper was made in China.

She had the ‘Hot Stuff Skipper’ head mold, blonde hair with bangs and ringlets and was dressed in a red shirt and skirt, white jacket, red tights, red hair ribbon and red shoes. Skipper came with a camera, a red bag and red sunglasses. She was made in Hong Kong.

Some dolls were dressed in white skirts instead of red. Marking: © Mattel, Inc. 1967

In Europe, this doll was available as well, but was called Tropical Skipper.

Island Fun Skipper had the same head mold like the Tropical Skipper from 1986, but her eyes were of a different blue. She was dressed in an orange swimsuit and a blue flower print wrap skirt and wore a pink and orange lei (wreath of flowers).

Finally, in 1988, the last Skipper that was ever produced with the vintage head mold was launched on the market:

This rare doll was only available in Europe. She had two short pigtails and bangs and came dressed in a blue swimsuit and a multicolored jumpsuit with LP print. She wore yellow tennis shoes.

California Skipper was made in China.

This website contains additional information to my other websites.

All dolls and items pictured are from my personal collection (unless stated otherwise). This is a non-commercial webpage - I don't make money with this website.

No part of this guide - no written information or photographs - may be reproduced, stored in any retrieval system, or transmitted in any form, or by any means including but not limited to electronic, mechanical, photocopy, recording or otherwise, without my written consent.

You are entitled to use the information for your private, non-commercial use only.