Her sun tanned skin with tan lines and her eyes distinguished her from the Malibu dolls before. The eyes were of a turquoise color and matched her new, turquoise two piece swimsuit, turquoise shoulder bag and lilac mirrored sunglasses.

This doll marked a new era of Skipper dolls with different head molds available simultaneously including a huge number of Malibu dolls – most of them sold in Europe only.

The first doll ever with a head mold other than the vintage head mold was the 1979 Super Teen Skipper #2756.

She had blonde hair with curly bangs and a smiling face. She was dressed in a pink bodysuit and purple shorts. Two more Skipper dolls with this head mold were produced: The “Western Skipper” #5092 in 1981 and the “Horse Lovin’ Skipper” #5029 in 1983.

The Beach Fun Skipper or Acapulco Skipper #2682 from 1979 was the same doll like the 1978 Malibu Skipper doll “Spiel Mit Skipper”.

She was sold with a blue/yellow/red OSS and a yellow beach bag with Skipper writing and an orange star. The doll was available in Europe only.

Another doll from 1979 which was released in Europe only, was dressed in an orange sports bodysuit, a white tennis skirt, white socks and tennis shoes. She came with a yellow tennis ball, a white tennis racquet and an orange cover with a Skipper writing and a blue star on it.

She was almost the same doll like the “Acapulco Skipper”, “Spiel Mit Skipper” and the 1978 “Malibu Skipper”, but with eyes in a slightly lighter blue shade, no suntan - and her head was a little softer. 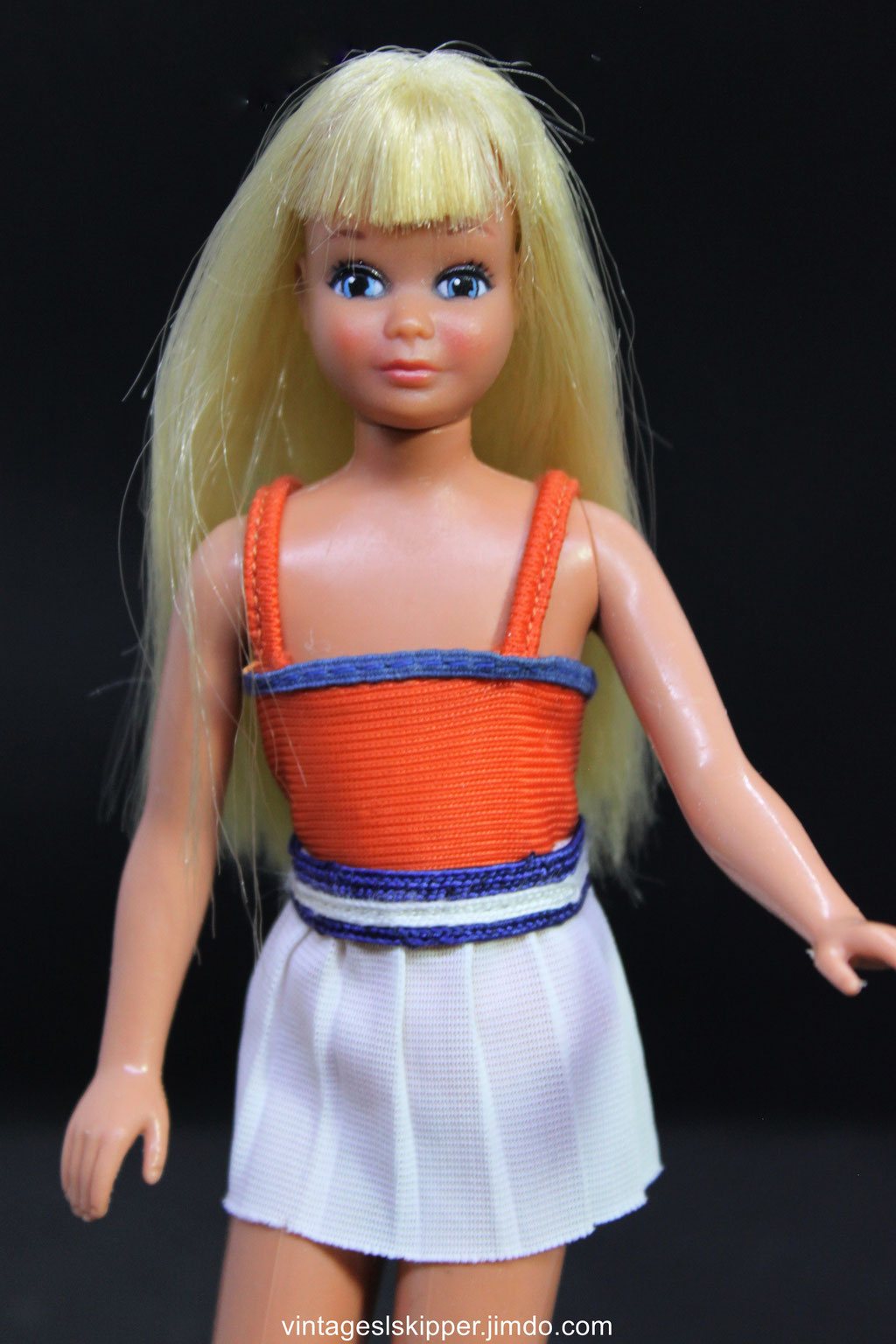 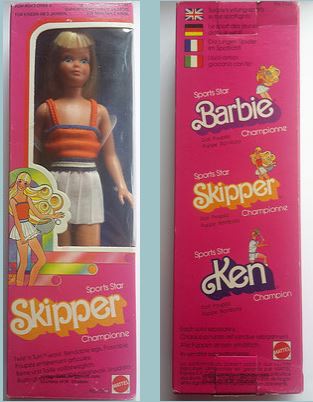 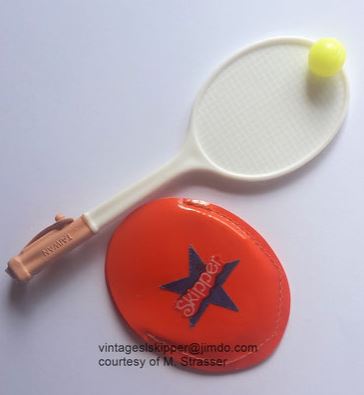 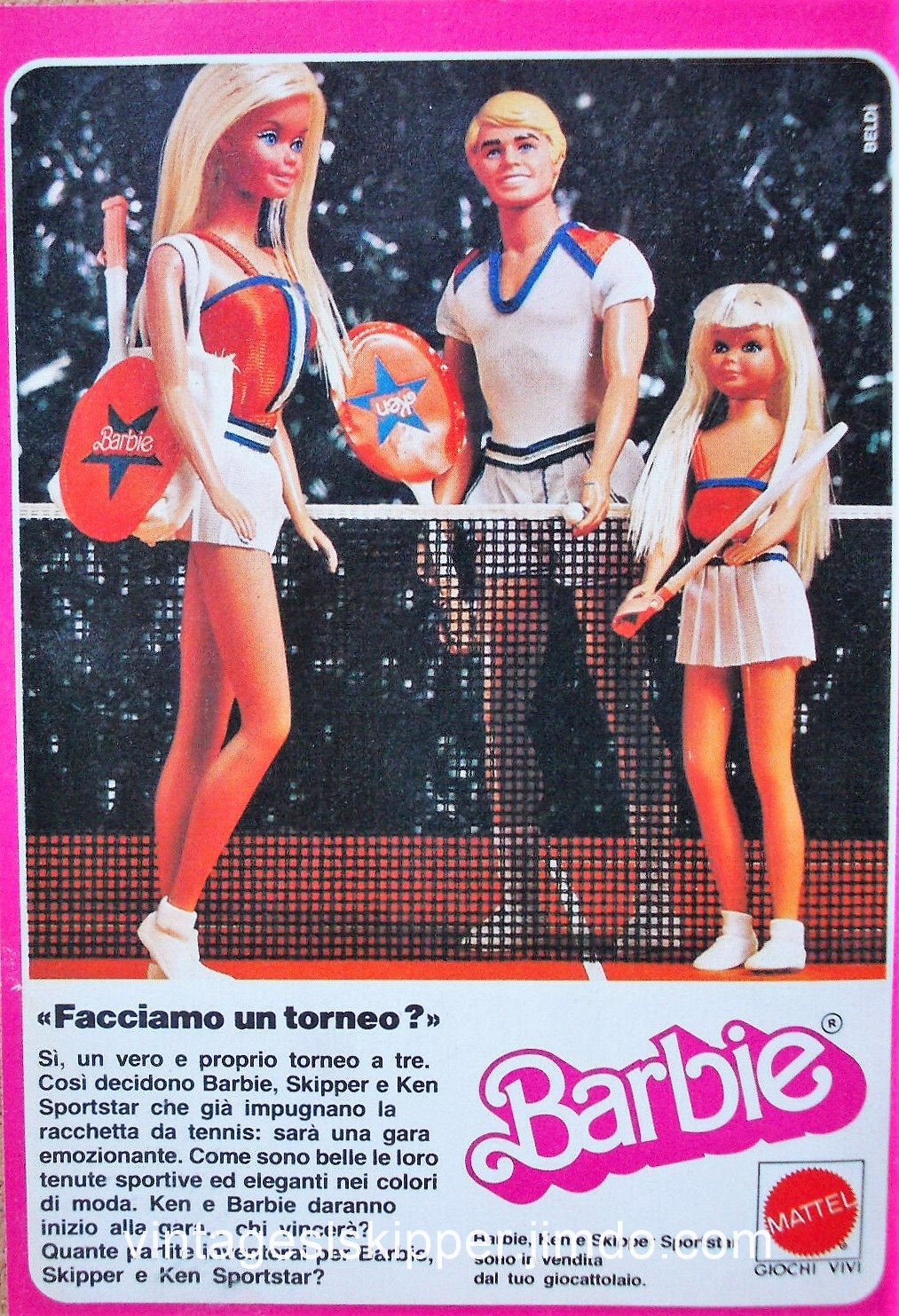 The Disco Skipper #3209 from 1980 was also only available in Europe. She was almost the same doll like the “Jeans Skipper” #3902 (her eyebrows are slightly darker) and was dressed in a gold top with attached white short pants and a gold belt.

The doll wore yellow sun glasses and came with white platform sandals, which were fastened with a strap around her ankles (not the same shoes like Growing Up Skipper’s original shoes) and a small gold shoulder bag.

This doll is very hard to find.

This doll was dressed in white pants, red cowboy shirt and white cowboy boots and came with a white cowboy hat and a lasso.

The Safari Skipper #4979 from 1981 was another Malibu Skipper doll.

She had blonde, long hair and bangs and was sold wearing a Safari outfit with a gold belt. The doll was made in the Philippines and only available in Denmark and Australia.

A later issue of the doll was produced in 1983 and sold in Europe, Australia and Canada.

This doll is hard to find.

She had slightly lighter blue eyes (less shiny) and much lighter brown eyebrows than the Sunsational Malibu Skipper of the same year and the Sun Lovin' Malibu Skipper from 1979. Her hair was very long and ash blonde.

Jeans Skipper came in a red T-shirt, blue jeans and white unmarked hard tennis shoes. She is the hardest to find of all European 70s/80s Malibu dolls and the prettiest. NRFB dolls have been sold for around 300 US $. Body markings: 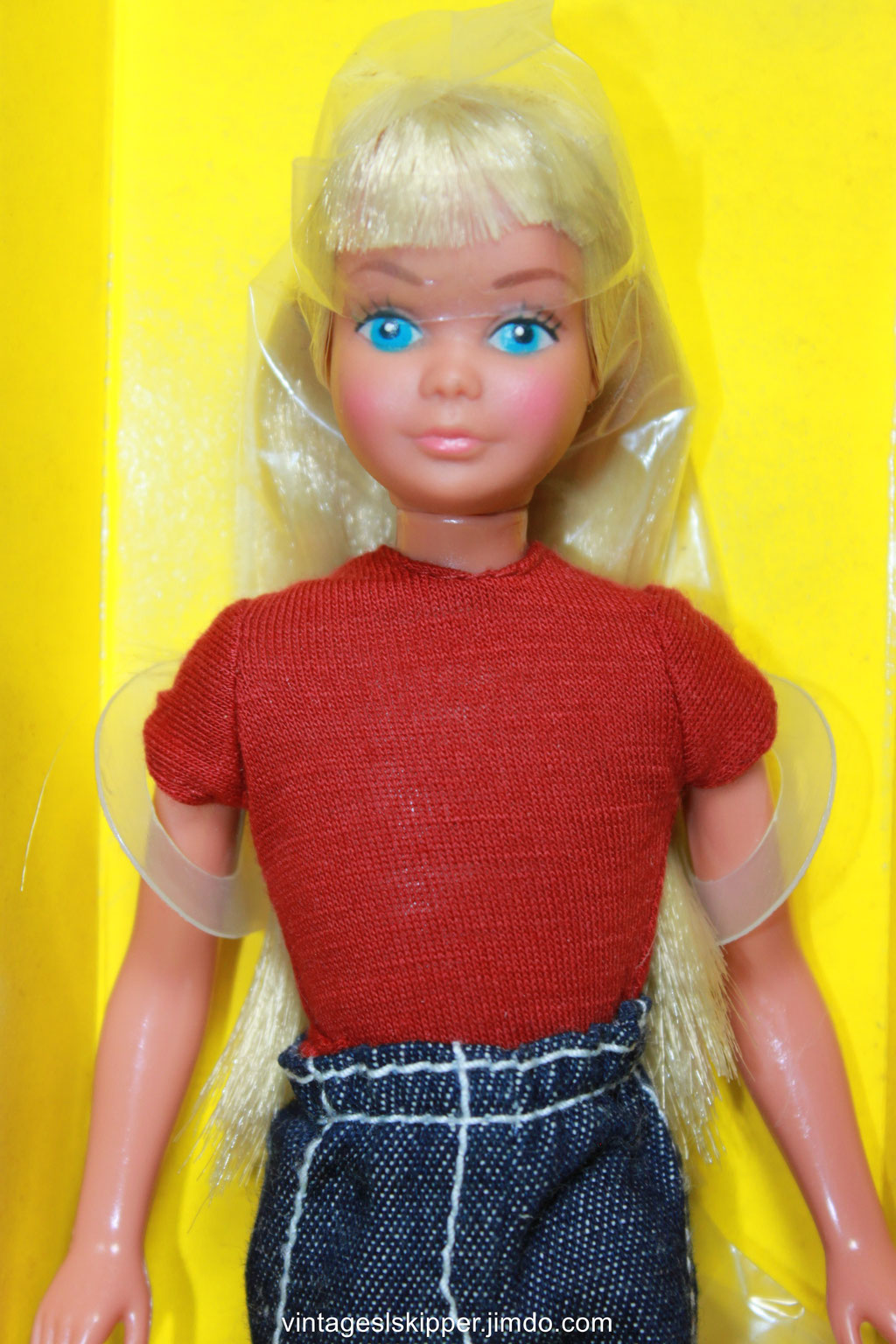 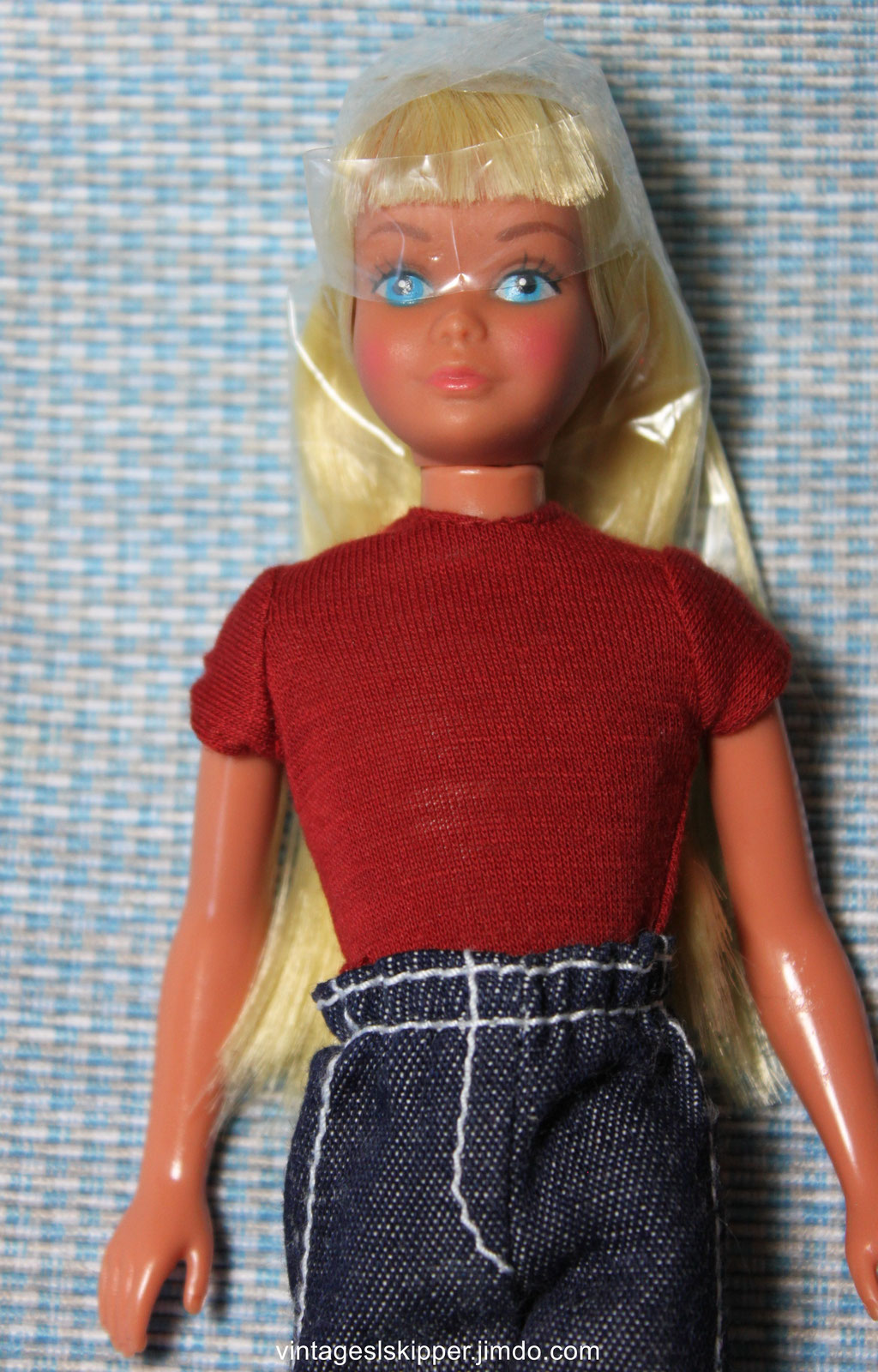 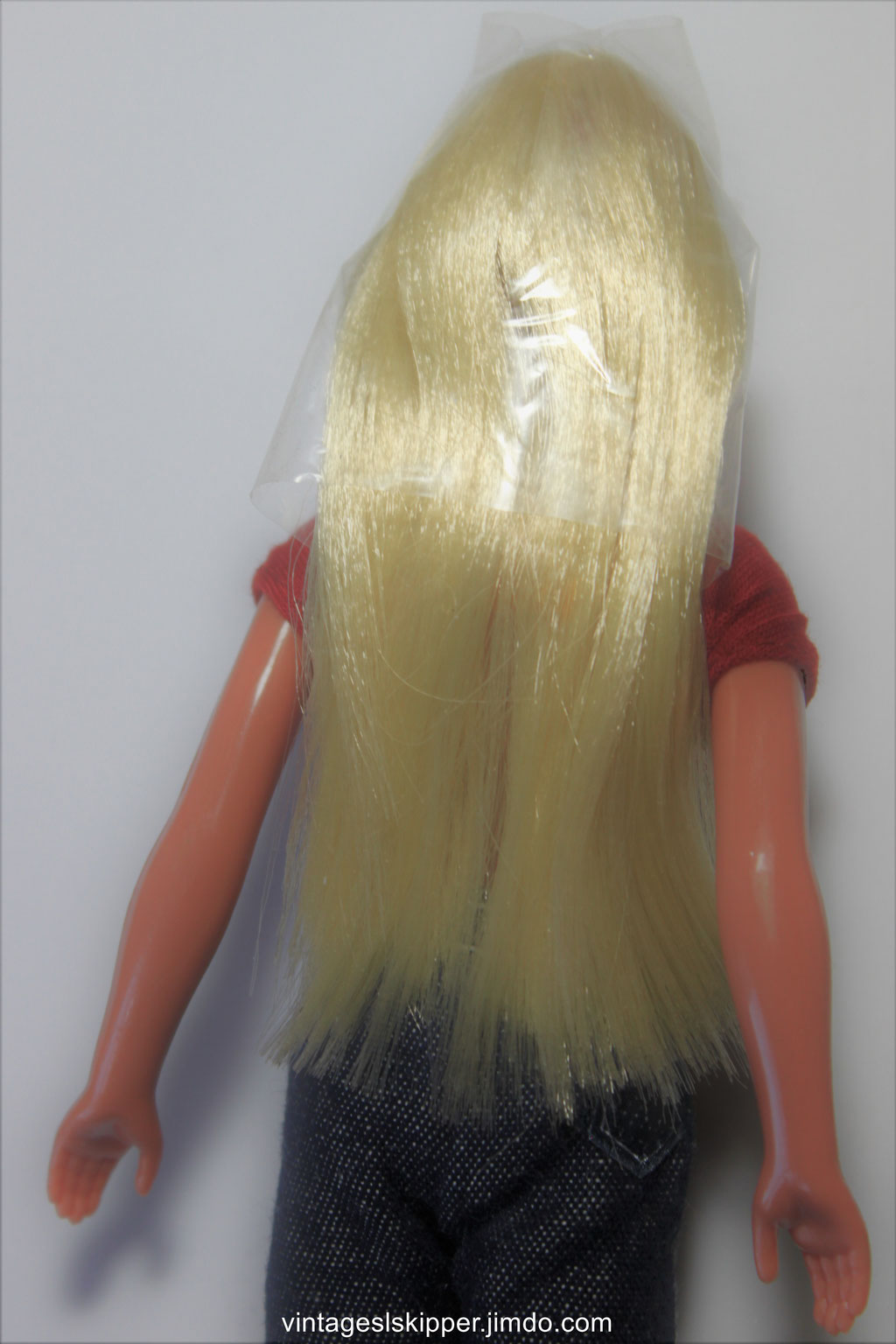 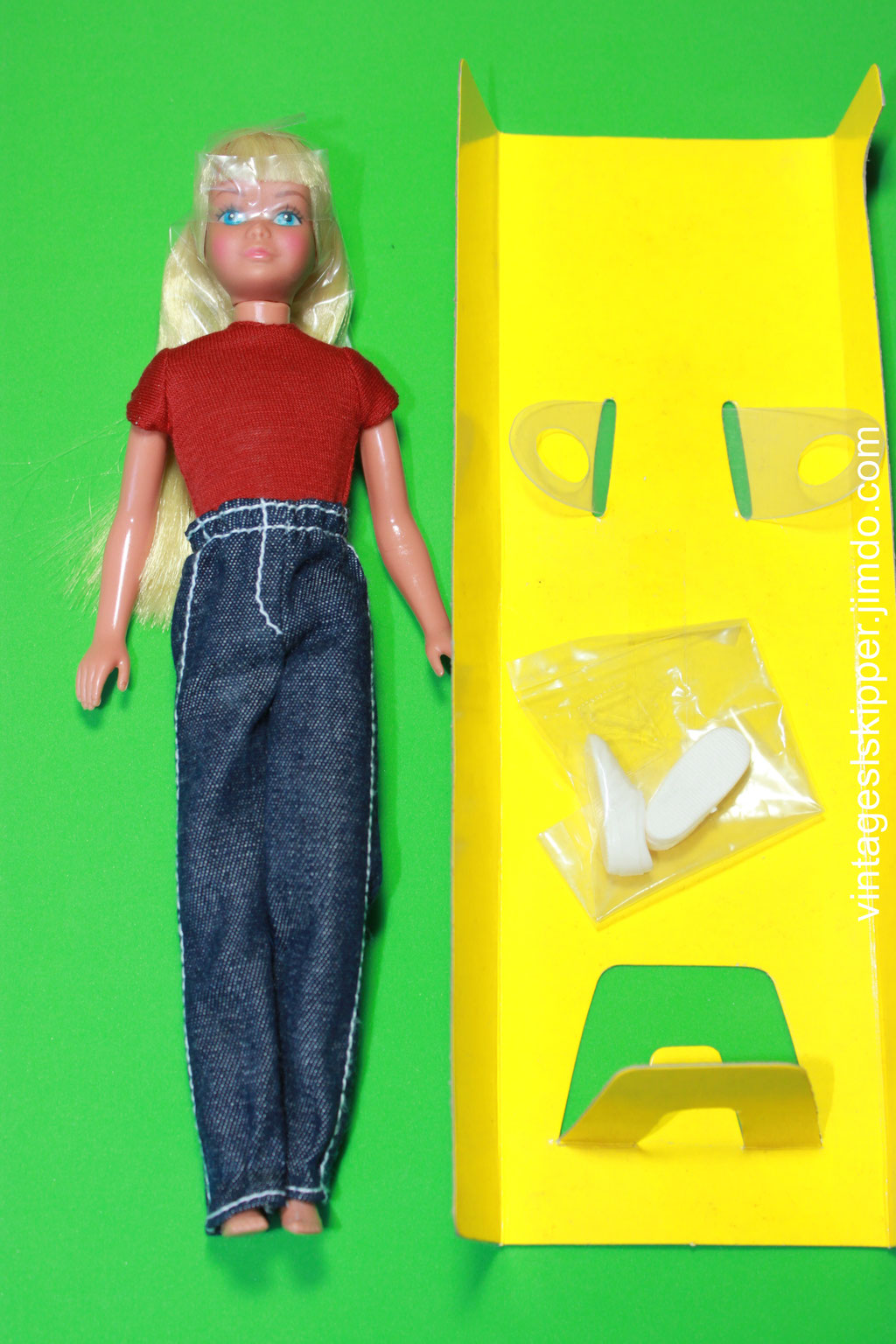 In 1982, the Sunsational Malibu Skipper #1069 was introduced. She was sold wearing a fuchsia swimsuit and matching sunglasses and came with a pink towel.

She looked like a Sun Lovin’ Malibu Skipper without tan lines.

Another doll that was only available in Europe was the Jogging Skipper #3987 from 1982. 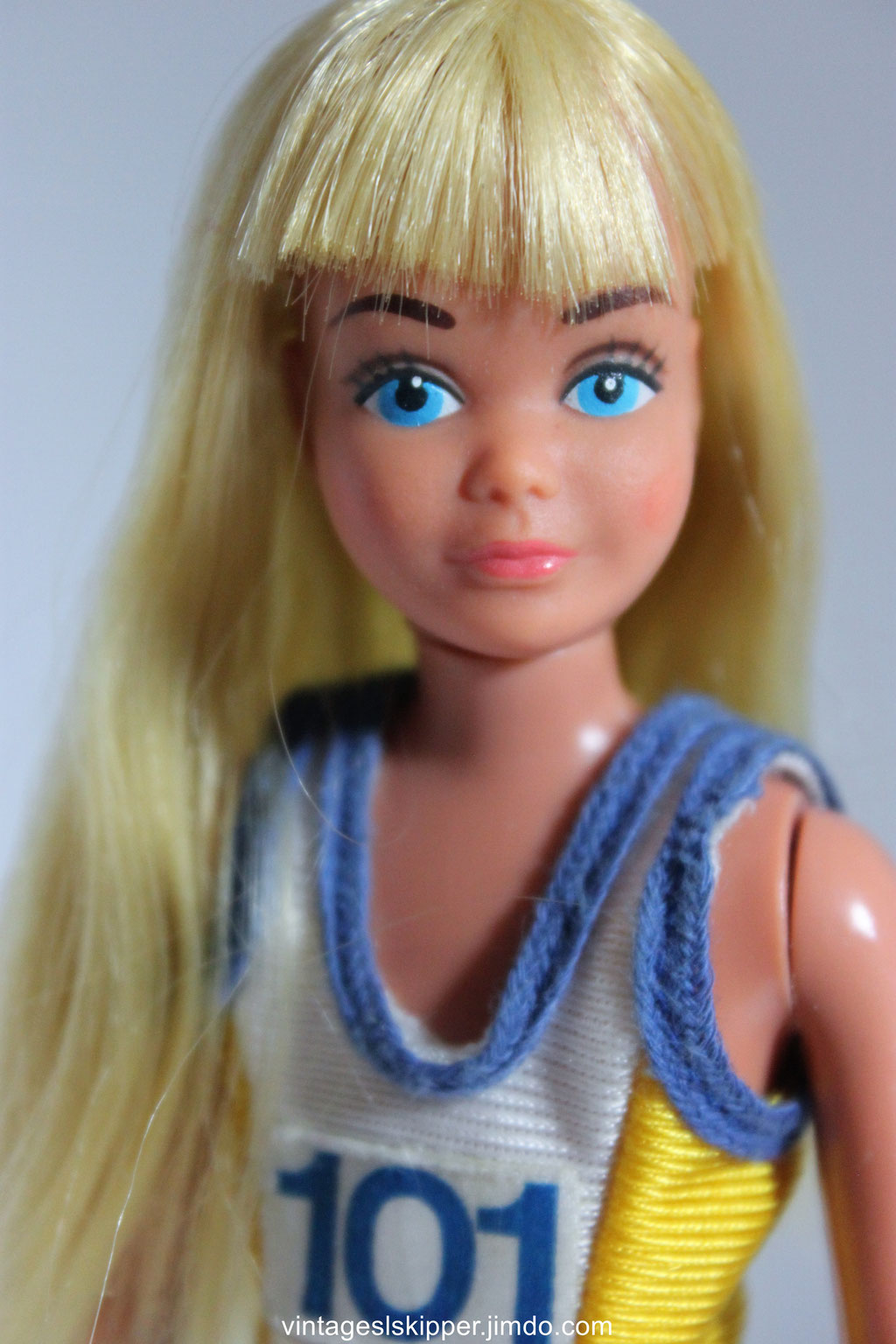 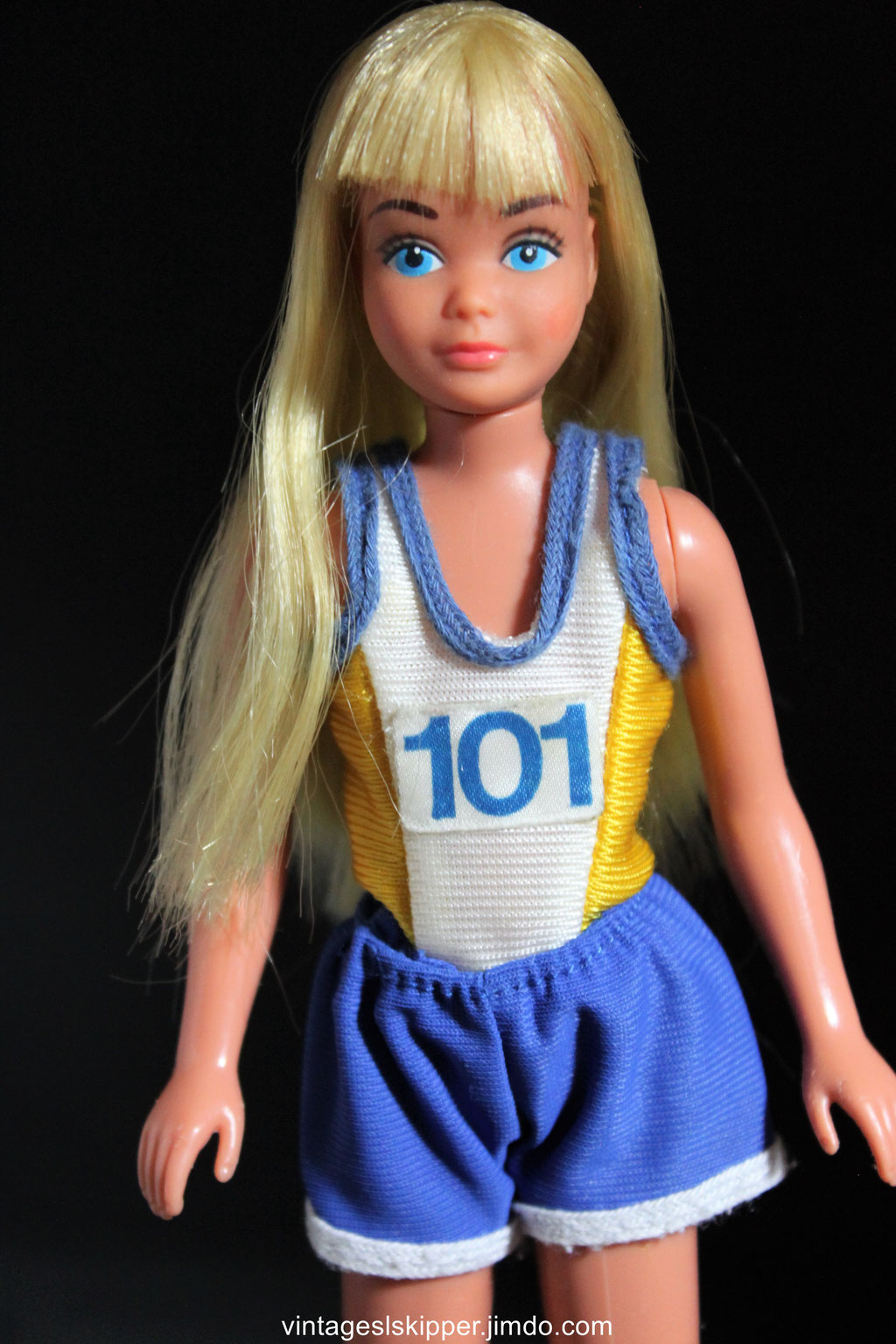 In 1983, the Super Dance Skipper #5840 was sold in Europe only. This doll was another Malibu Skipper. She was dressed in a lilac bodysuit and pink gaiters and came with white tennis shoes. The bodysuit was the same as  the bodysuit of the 1984 Great Shape Skipper dolls, except for the color.

There were several versions of the outfit, most boxes contained an extra headband in dark lilac, some contained a white belt that could be used as a headband also, and some dolls in Spain were sold with a lilac satin belt with an attached lilac flower (rare).

Skipper was available in regular pink boxes or in special offer pink boxes (Spain). These special offer boxes and rare variations were produced by a company in Spain – Congost – in collaboration with Mattel. This company got the molds from Mattel, but the finish was made by Congost.

The dolls and fashion sold by Mattel/Congost differ from the regular issues. Different hair fibers, make-up and material for the fashions were used. 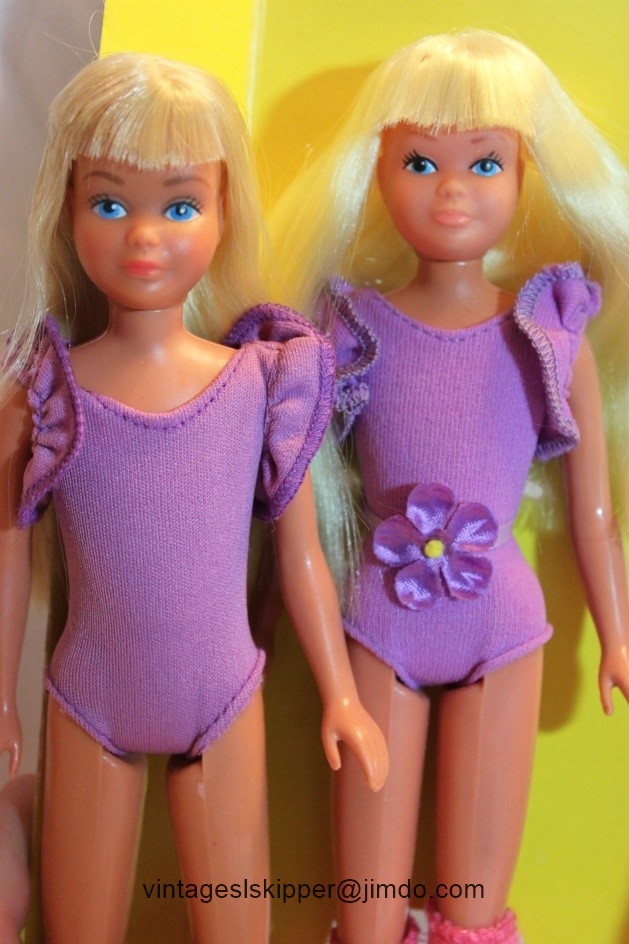 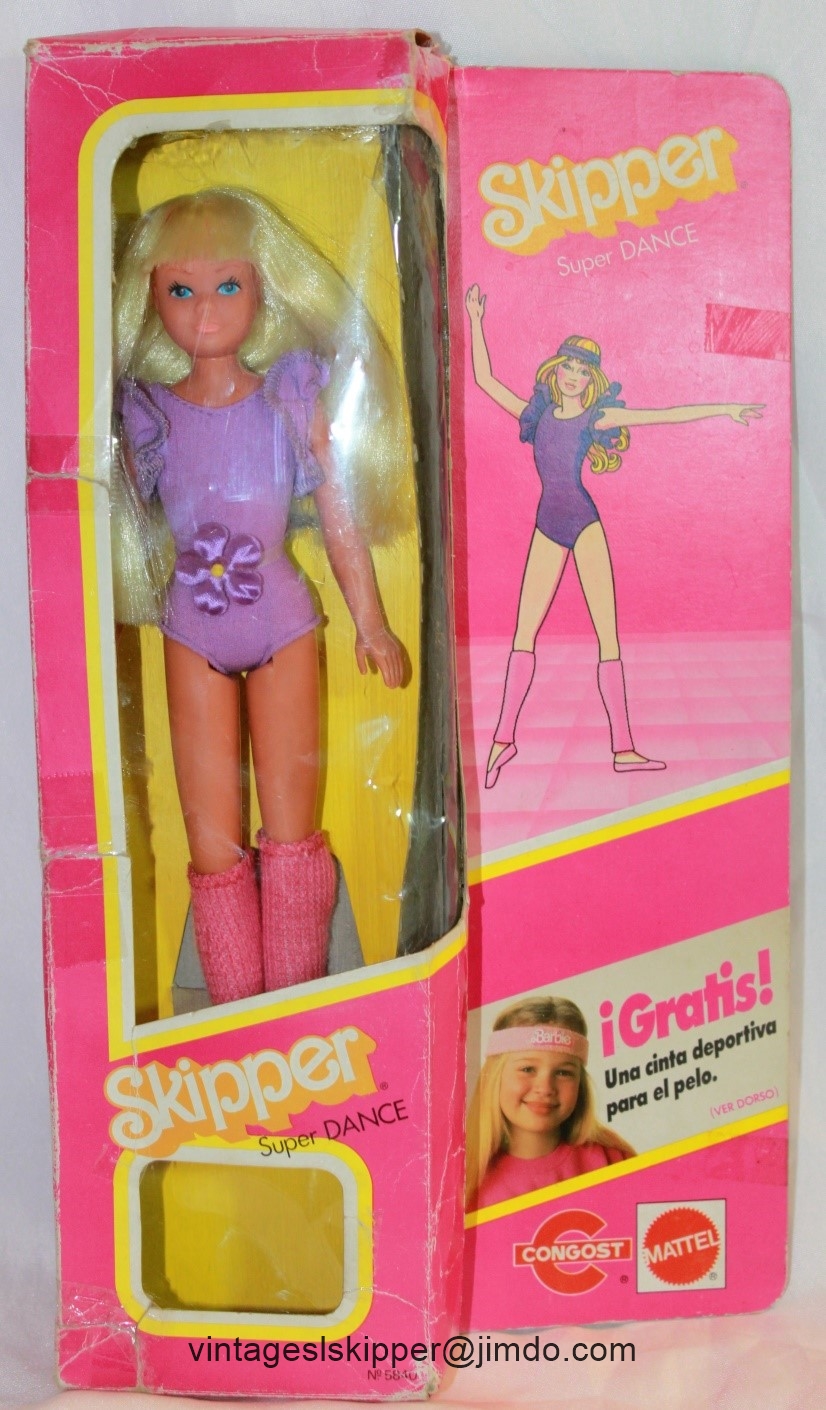 This doll was the first of all Malibu Skipper dolls without bangs, and with a slightly bigger head. Her hair was braided.

She came in a one piece gold and turquoise swimsuit. The box contained three sunglasses in lilac, pink and green as well as a blue towel which could also be used as a bag.

This website contains additional information to my other websites.

All dolls and items pictured are from my personal collection (unless stated otherwise). This is a non-commercial webpage - I don't make money with this website.

No part of this guide - no written information or photographs - may be reproduced, stored in any retrieval system, or transmitted in any form, or by any means including but not limited to electronic, mechanical, photocopy, recording or otherwise, without my written consent.

You are entitled to use the information for your private, non-commercial use only.